The System-level Info in the Outlier Dictionary of Chinese Characters shows you the system-level connections between Chinese characters at a glance.

That is, you'll be able to see any character in which the component is:

To make it easy to use, we've highlighted the pronunciations in the sound series, and the original meanings in the semantic series, so you can see all the relevant info at a glance!

A Video Tour of the System-level Info

A look at a full System entry: 立

A sound series is a group of characters containing the same sound component. We show you all of the characters in the sound series, and highlight their pronunciation so you can see everything at a glance.

This will show you the range of different pronunciations a sound component can have. Super useful! 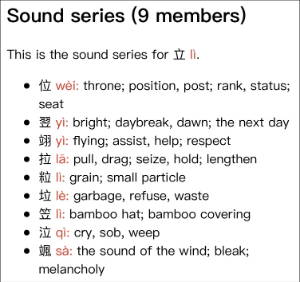 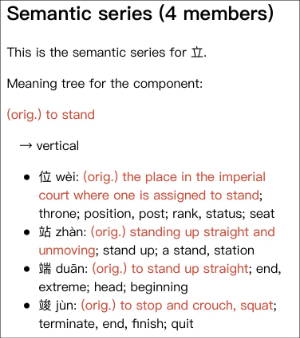 Remember, the original meaning is the only meaning directly related to the character's form, so this lets you easily see the relationship between component meaning and character meaning!

Empty components don't express sound or meaning. Sometimes they're just there to distinguish one character from another. Other times, the component was originally something else, but corrupted over time into what it is today.

This segment will show you all the characters containing the in which the head component is an empty component. 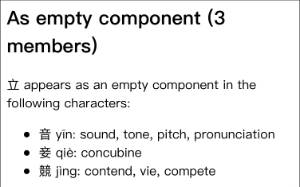 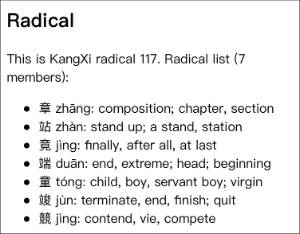 Radicals are a traditional way of organizing paper character dictionaries. Many people think that "radicals" and "semantic components" are the same thing, but they're not!

Compare the characters here using 立 as a radical with the characters in the semantic series and empty component lists above, and you'll see what we mean!

The Outlier Dictionary of Chinese Characters

A revolutionary new learners' dictionary for Pleco, developed by a team of linguists and expert teachers! Our dictionary gives you clarity on how Chinese characters ACTUALLY work, based on the latest research.

Note: our dictionary is an add-on for the free mobile (iOS and Android) dictionary app Pleco. It fully integrates with all of Pleco's other great features!

The Essentials Edition includes:
Sold out

The Expert Edition includes everything in Essentials, plus extensive information about the origin, evolution, and other historical information for every character.
Note that this version hasn't been released yet. You'll get the current version of the Essentials Edition, plus all the Expert entries we've finished so far (currently 190). We'll be adding new entries regularly, and you'll get all of those updates until it's finished!
Sold out