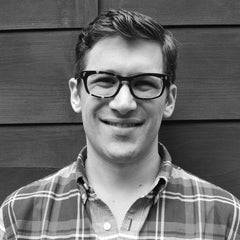 John got into Sinology largely by accident. He was studying film scoring at Berklee College of Music in Boston and developed an interest in Asian cinema. Being particularly drawn to the sound of Chinese, he started learning it as a hobby. Over the next few years, he read a lot about the Chinese language and writing system (at the expense of actually learning the language), and his interest in this subject led him to make the decision several years later to change careers and move to Taiwan to learn Chinese.

In 2011, still at a beginning level in Chinese, he came to Taiwan to study at the Mandarin Training Center at National Taiwan Normal University on a scholarship from the Ministry of Education. Not content to follow the normal intensive curriculum, he studied as much additional material outside of class as he could. He also self-studied classical Chinese on the side, asking more experienced people when he was unsure of something.

After 9 months at the MTC, he met Geoffrey Humble and they founded the Taipei Classical Chinese Reading Group, a weekly reading group which met weekly for 4 years, largely consisting of graduate students from top Western universities and ICLP students. In the fall of 2012, he audited Seminar on Paleography (古文字學探討) in the Department of Chinese at NTNU.

After 15 months at the MTC, John left to begin working as a freelance translator and to focus on applying to the NTNU Department of Chinese. He was accepted and offered a scholarship, so after only 2 years of serious Chinese study he began taking courses alongside Taiwanese graduate students.

He spent a year in the Department of Chinese, during which he took:

During that year, John had the unbelievable (mis-)fortune of taking three separate classes that required him to copy the Shuowen Jiezi (說文解字) by hand. That was quite enough for him, so he now lives in Tokyo, Japan. In addition to his work with Outlier, he spends his time studying Japanese, reading books on Chinese paleography, history, and archaeology, keeping his Chinese sharp by reading the 古文觀止 and various other books, and enjoying the incredible food that Tokyo has to offer. If there were any more time in the day, he’d spend it doing more of the same.